To start off, here's the customary island snapshot: 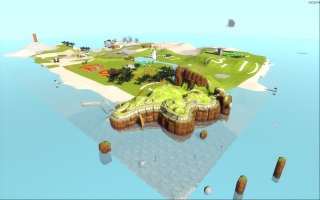 It may not look tremendously different from the last one, aside from the translucent water and added objects at the near corner.  However, a number of locations have been worked on in the past few weeks, which happen to be either far across the map or underground, so I figured I'd post some highlights.

Keep in mind that all of this is placeholder graphics; because we consider gameplay to be very important, we are planning out the gameplay carefully before we go into full production.

This area is an old ruin carved from stone; as the world gets developed, the area around it will become more deserty.  In a later blog update I'll show this area more extensively: 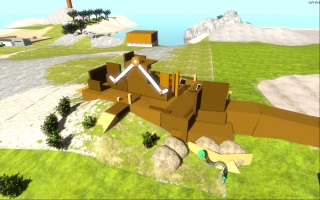 Here's  a cave at a junction of underground tunnels, lit by colored lights so that you know which tunnel is which: 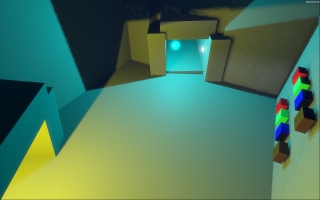 A cathedral, built on a hill; its walls are old and crumbling, but it's been well-cared-for: 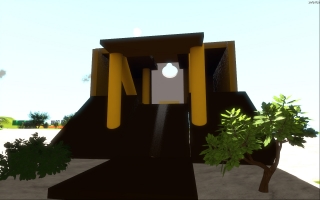 At the edge of the forest, near a bridge across the river, someone has been cutting down trees.  What was going on here?  Why did they just leave these logs laying around? 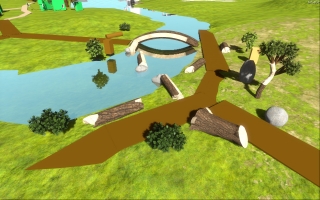 We've also been working on rendering for grass, bushes, and trees.  Here's a shot containing some of our new grass: 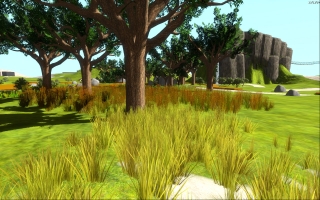 Trees and bushes used to cast overly-dark, jagged shadows, because the shadow system didn't know how to look at their texture maps to figure out transparency.  That's been fixed, and now shadows cast by leaves are the shapes of the leaves: 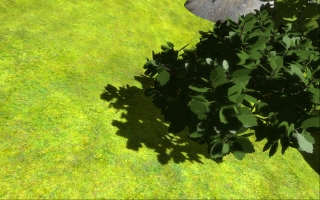 Much of the other work that I personally have been putting into the game is about the user interface for the puzzles.  As I mentioned, gameplay is the utmost concern; this being a puzzle game, you spend a long time solving puzzles, so it's important to make that feel good, even at this early stage.  There is still plenty of work to do there, but a very important aspect of the user interface has improved drastically this week, and I am very happy with the results.

More news as it comes!