About the Blue Mazes

Just after PAX, Stephen Totilo posted a video at Kotaku showing some gameplay of The Witness. This is video from the start of the game and shows some basic stuff, including a set of blue mazes mounted on poles and on walls, that the player must solve to proceed. 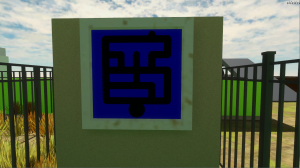 I've seen mixed reactions to these mazes and to the gameplay shown in the video. Some people seem to have jumped to the conclusion that the game is going to be about solving simple maze puzzles, and thus not be particularly exciting.

If that thought crosses your mind, all I can ask is to have faith. I wouldn't make a game about solving a series of rote puzzles. The footage came from the beginning of the game because we don't want to spoil anything major. But even this beginning-of-the-game stuff has more to it than meets the eye.

It's like Braid, in a way. Back before Braid was released, I never made a trailer video for it, because I couldn't come up with a way to show in video form what the game was about. You can show some rewinding happening, or other funky time stuff, sure, but what is cool about Braid is not the mechanics of those things or how they look on the screen. What is cool about Braid is what happens in the player's mind during the puzzle-solving process. The time stuff is the method by which that is implemented, but the rules of time manipulation do not contain the magic. Watching a video, it's nearly impossible to see the magic. You have to play the game to see the magic.

The Witness is like that too. The blue mazes are a major aspect of the game, but they are not the point. The point is the magic that happens in the player's mind when he understands the subtle things that the mazes are saying -- because the mazes aren't just puzzles, they are lines of communication that aggregate, become more complex and eventually say surprising things. This can't be seen in a video; you have to play it to have the experience. The magic is in the player's head, not on the screen.

The only two guys who have played The Witness to completion have said it will be better than Braid when it is done. I am certainly not going to jump up and down and say "hey this game is better than Braid", or even claim that Braid is good. But I just want to put that out there as reassurance to those of you who are worried about that gameplay video.

I have a file with about 80 game ideas in it, most of which would probably make really good games. But I can only make one game at a time right now, so I had to pick one. I picked The Witness, even though it more difficult and expensive to make than most of the other ideas, because I was more excited about the core concept of The Witness than about the other 79 ideas. This is a highly ambitious game that stretches my ability as a game designer to its limit.

So if you don't yet see why the game is ambitious or exciting, please have patience! We'll be releasing more information as the game comes closer to completion...

And whatever you think about what you've seen so far, I'd like to thank you for your interest in the game!