It's been a while since we've posted one of these... 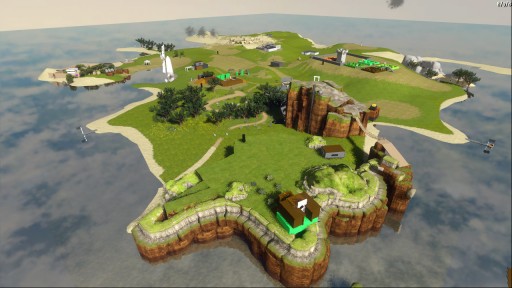 One interesting change, compared to the previous shots: you'll notice that the lake that used to be in the center of the island, with the windmill on the edge, has moved over toward the left side and become a bay.

This is one of those interesting area where design and technical constraints interact heavily. We wanted the water of that lake to be reflective, but the way 3D graphics works, you basically need to render the entire scene an extra time in order to make a reflective surface. For outdoor scenes this is very expensive. Now, we also wanted some of the water out at the edge of the island to be reflective. If the inland lake and the water near the beach were at different elevations, this would mean we need to render the entire scene twice, all the time, to generate water reflections, before rendering the main scene. This can be optimized somewhat, but in an open-world game, there is only so much you can do.

The workaround to this was just to keep the inland lake at sea level, so that we can use a single rendering pass to generate all water reflections. Technically this worked fine, but design-wise, it meant that we had to have this big spot in the middle of the island that was at sea level, while also having everything at the edge of the island being at sea level (by definition). This gives the island a doughnut kind of shape, and given that the island is so small, this ended up severely restricting how many elevation changes can be introduced -- the island was being artificially influenced to be flatter than it ought to be, because of this constraint of being sea-level in the middle.

So I moved that lake off to the side and connected it to the ocean. This involved moving a couple of other areas as well. The gameplay is preserved, and the new position is actually better for certain gameplay purposes. The island is still pretty flat, but I think you'll see it getting less flat over time, now.