A while ago, I wrote a post about package sorting in order to minimize diffs when patching on Steam.

I ended up running a straightforward test where we would change the game minimally and build consecutive patches. The patches turned out to be quite large, but upon investigation, it was clear there usually wasn't a good reason for this. Our compiled shaders would contain small differences, as would many meshes in the game.

These looked like uninitialized memory errors and, upon further investigation, that's indeed what they were. They are fixed now, so patches are a lot smaller.

However, patches may never be as small as we would like, and I find there is a pretty deep philosophical issue where.

Right now we have 17MB of files that change in response to minimal changes in the game (say, moving a few entities in the world by small distances). These are mostly cube maps for Light Probe entities, which are used to do lighting on nearby objects. Here's what a Light Probe looks like in the game: 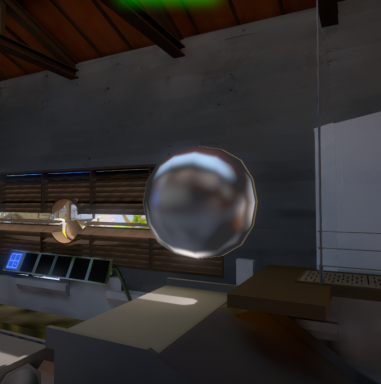 (Well, you don't see that sphere the game, only in the editor!) To generate one of these cube maps, we render the scene in all directions, from the point at the center of that sphere, then apply a blur to the result.

Imagine that we move a couple of entities in the world, even slightly. All Light Probes that can see those entities are going to change, by at least a pixel or two. Because we are applying a big fat blur kernel, a 1-2 pixel change becomes small changes spread across the entire image.

We have an automated script that preps the game for release, clearing out data that we only use for development, and ensuring that automatically-computed things get recomputed (like LODs for faraway objects). Recently we added a step to this process that re-generates all the Light Probes, because it just makes sense to update those automatically. If we have to keep track of them manually somehow we are just going to make mistakes.

That said, maybe it's the case now that more light probes are changing than I would expect. I am wondering if other things in the game are causing them to change. For example, when you are playing the game, foliage waves in the wind. I wonder if the animation timer for plants is ticking during the process when we generate light probes, causing them to move over time? This would cause most light probes to be different every time we bake them, regardless of other factors.

Now, there's a bigger issue. In addition to light probes, we have pre-baked lightmaps all over all geometry in the game: 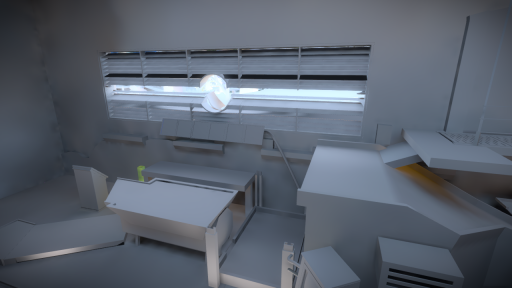 In a way that is reminiscent of the light probes (but a bit different), we generate these by placing a camera at many points along each surface, rendering the scene from each camera, and interpolating those into a final result.

The light probes are not so big, but last I checked there are between 500MB and 700MB of lightmaps. However, re-baking the lightmaps is not part of the automated build process; we have to trigger a bake manually. But it seems like good policy to do a full rebake any time we change the game significantly. So, we are probably looking at a minimum patch size in the 500MB range.

I guess that is not such a big deal, since we are not an online game that would be patching all the time. Hopefully once we release the initial version of the game, the "content" won't change very much (sorry, but the word "content" as used in video games is kind of absurd, so it's hard for me to use it without sarcasm quotes; it's almost as bad as "title", which is a word I refuse to use, except to make fun of its use)... the "content" won't change very much, so patches would be rare.

We'll see. We have a while to figure these things out.