Orsi Spanyol June 7, 2013 June 7, 2013Uncategorized
Hello! I'm Orsi, the girl who ended up modeling most of the trees for this game. When I joined the team two years ago, I didn't think I would be doing much serious environment modeling. I was fresh out of school, hired to develop some interesting, hidden things around the island. For the first six months or so, I did a lot of brainstorming and playing around in the engine, but nothing that improved the aesthetics of the island in any significant way. However, since some of my projects involved mocking up certain types of trees, I realized that tree modeling is one of my favorite ways to unwind. So, when I got burned out working on a particularly challenging project, I started to volunteer to make tree sets.
Back then, most of the trees around the island were variations of an oak-like tree, seen in the previous tree updates. The landscape architects had plans for different tree species for each unique area, but the other artists didn't seem to enjoy modeling vegetation, so they mostly focused on the buildings and paths, and used the old trees we already had to complete the scene. The result was a lot of architecturally distinct areas, set mostly in the same generic oak forest environment.
When I added my first few tree sets, the other artists grew excited and started letting me model or modify trees for them, and certain places started to really pop out as unique, coherent areas. Here are some examples of the trees I created: 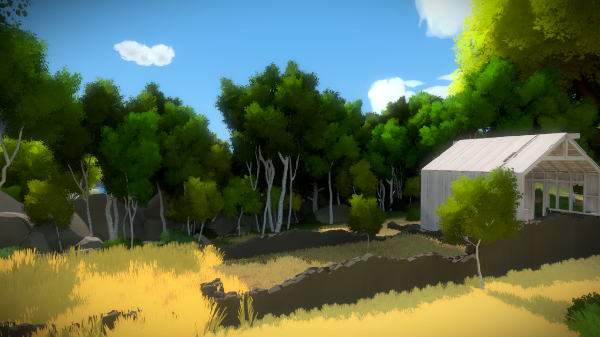 Near the starting point of the game, there is an agricultural field lined with birch trees. Luis, an other artist on the project, made some birches of his own. They looked nice, but they had short, stubby trunks covered up by with big circular clumps of foliage. When they were placed around the area, they just didn't feel like a birch forest to me. I missed the defining characteristic of a birch forest: the thin, graceful trunks that parallax beautifully as you walk past them. I asked Luis if he would mind if I made some birches of my own, and he was happy to let me do it. You can see the result above.

The autumn forest existed way before I joined the team, but also used to consist of differently colored generic oak trees. I made a set of maple trees instead, with dark, tall trunks and thin sprays of foliage positioned loosely around the branches. These were probably the most controversial trees I made. We spent a long time debating whether the impressionistic way the leaves were scattered around the branches was working with the style of the game or not. In the end, everybody seemed to like them too much to change them. I think this way of modeling the foliage allowed for the airy, glowing, golden feel I was trying to achieve. This was also the place I first realized what a big impact trees had in defining the area. Once I placed the trees, all I had to do was create some ground textures and grasses to create the forest you see above.

In this screenshot, you can see some oaks I made to replace Shannon's old ones. I created a set of three, in different stages of growth, which is usually the way I approach tree making. It is the best way to create an area that feels like it is alive and still growing. The huge oak in the foreground was one of the few modular trees I actually had to sculpt more detail into, since the trunk got so huge it needed to be broken up a little.

The pine forest is very dear to my heart, because it's my project...and I don't mean just the modeling. Jonathan had three puzzles in a mostly empty area, and I decided to explore the concept behind them a bit more. I ended up designing and modeling this whole area, including the puzzles (with tons of feedback and guidance from Jon, of course). The pine trees here were the landscape  architect's idea, and I was very excited to model them. I tried to stay away from making them all look too Christmas tree shaped, so I found reference images of older, taller pines with saggy, less regularly spaced branches, and decided to go with that. I especially love the way the light bounces around in the messy foliage. 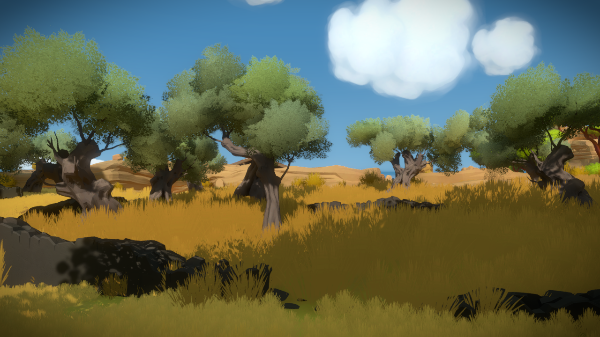 The landscape architects also asked for some mangled, old olive trees in the agricultural area. This was a nightmare to figure out how to model to fit our style, since we don't usually have a lot of detail in objects, and the reference images they provided had crazy twisted trunks full of holes and cracks. I ended up sculpting the trunks in Zbrush, and decimating them, leaving some hard edges. We use this process a lot for other things around the island, but it was the first time I used it for trees. I made the branches modular, and created two significantly different trunks, which the artists can use to combine into even more messed up, mangled shapes. I am still not entirely sure whether I like these or not. 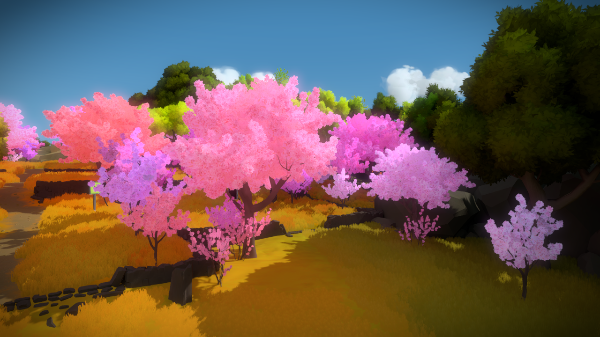 These flowering apple trees took me a while, and they are still not very efficiently textured, but they are getting there. The challenge was to get the silhouette looking like there are branches coated with flowers poking out all over the place. I feel far from finished with these trees, but they seem to be getting a lot of positive feedback, which surprises me constantly. 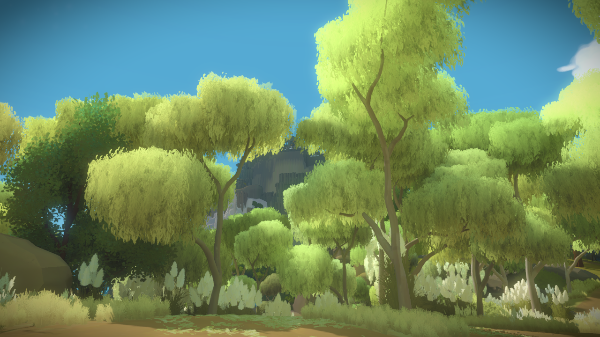 The eucalyptus forest is a little transitional area I decided to dress up when I had a week to spare. I didn't get very far with the trees, there is actually only one eucalyptus model, and it's not very detailed. I had some difficulty with the very directional foliage. All the leaves had to point down, which was very different form the way I used to make foliage before, where I'd just place planes at random angles in a big bunch. I'm sort of glad I left it where I did, however, because I learned a lot from the following plant I made, and I can apply it to the problem when I revisit these trees during polish. 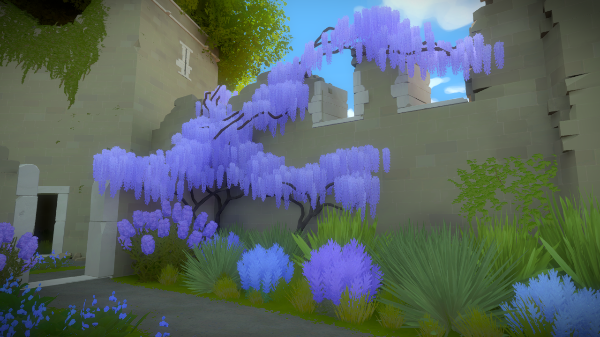 This last tree is more of a vine, but it's one of my latest creations, and I'm very happy with it. It's a modular wisteria set. There are two bunches of flowers, two trunks (for a corner and for a flat wall), and an independent bunch of vines. All these different pieces can be placed to create varied shapes, to make each plant look unique and and adapt to the surface it's climbing on. The way I created the flowers is how I'm going to re-do the eucalyptus foliage in the future, and I imagine that will make those trees a lot more interesting and beautiful.
Well, these are just some of the trees I made, and the other artists have made some of their own, but these seemed to be a good variety to show off and talk about. Hopefully I didn't ramble on too long, I am just always excited to talk about any aspect of the game I can!