A new lecture about game design. 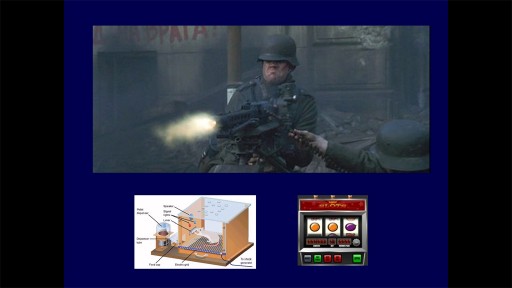 This talk is called Games and the Human Condition; it was given at Rice University on September 27, 2010. It's about "best practices" of modern game design that I find unsettling, and the way in which "social games" and "gamification" are destructive.

A full video is available from this page at Rice University.

Here's a long and wordy abstract:

Video games have evolved tremendously over the past few decades; they're much more entertaining than they used to be. That is not by accident; we, the community of game designers, have been continuously refining our techniques. The most common way we do this is by testing out our games on you, the players, and optimizing for the "best" result (where "best" is defined by us). As this process is ongoing, what kind of relationship exists between the designer and the player? Is it artist/audience, experimenter/subject, entrepreneur/customer, or tycoon/resource? Invariably it's some admixture of these things, the particular ratios for a given game being chosen by its designers (usually without awareness that a decision is being made). Today, due to the way the Internet is widely used, and because game designers are becoming more serious about certain aspects of their craft, the iteration time of this game design optimization process is shorter than ever before: designers can observe their players much more thoroughly, and more quickly, than they ever have in the past. At some point a quantitative change becomes a qualitative one: the result of all this competency may be heavily destructive. Some aspects of the current notion of "good game design" may in fact be very bad, or at least indefensible, from an ethical standpoint. Today's "better" video games spend a great deal of effort to undermine defenses that took you tens of millennia to evolve. They tend to be successful at this. As designers keep evolving their craft and gain greater analytical power, what will happen?