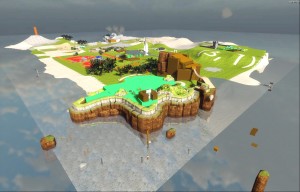 We are starting to tinker around with the sky (this one is way too dark). Also, moving around a bunch of locations and adding some new ones.

I'm doing a couple of weeks' worth of serious map organization / reorganization in order to get the game to a point where we can playtest it at pretty much any time, and whoever sits down to play will have a reasonable experience. The game was in this kind of shape back in January, but we had to do a lot of work on game internals in order to get things where they needed to be, interactivity-wise, for the mid-stage of development. Now that most of that stuff is done, it's time to put the world/content back in playable shape; from there, new stuff can be added in a way that continuously fills out the world. Once I feel like the world is "full enough" we can leave the preproduction phase and start going into production (which is where we start caring about what the graphics look like, start seriously doing voice recordings, etc).

One area I've been working on for the past few days is the start of the game. It is meant to be a semi-guided experience that clues the player into what the game is about. (If you remember the beginning of Braid, it's something like that.) You may have seen the interior of the house (the white building on the left) in earlier blog posts: 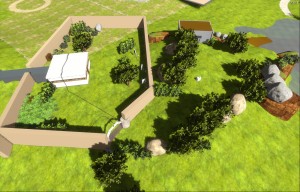 The area just outside the house is a constrained path, but very soon the player exits this area and can freely roam an open world.

Most open-world games want to impress you with the hugeness of the world, and the corollary to that is that you spend a lot of time walking / riding / driving between places. The Witness takes the opposite philosophy: it wants the world to be as high-density as possible, just packed full of interesting things. As the island develops, we will be placing areas as close to each other as we can, within constraints. (Braid had a similar high-density philosophy -- though it manifested in a different way -- and many people appreciated that).